skip to main | skip to sidebar

American Flatbread and the Today Show 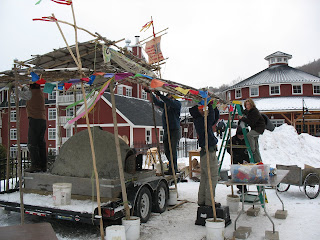 The folks at American Flatbread, it seems, can truly work their magic just about anywhere. Here they are at the base of Mt. Lincoln in Warren Vt., prepping for a Today show piece (see YouTube video), which where I found them on the afternoon of February 20, when my father popped into the lodge for a minute leaving me to poke around.
Posted by Backyard Boulanger at 5:50 PM No comments: 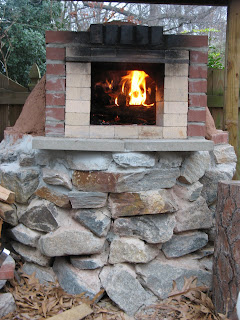 Of all places, I found inspiration in a supermarket.
Shortly before Christmas we were in McLean and in need of a good spot to meet a friend staying in Loudon County. She suggested the cafe of a Wegman's grocery store, which is how I found myself mesmerized by the spectacle of team of Wegman's bakers feeding a monstrous cylindrical oven. The oven floor on this beast rotated and was driven by a large circular crank placed by its mouth. The baker would slide a handful of loaves into the oven. Turn the crank. Extract some golden loaves and slide in a handful more. Brilliant! But what was she doing there with that paper and wire mesh strainer filled with flour? I leaned over the Plexiglas divider. "Sample! Mister! Sample! Merry Christmas!" I was assaulted by a dramatic Korean assistant baker with a basket filled with samples. When I regained my composure (I startle easily) I could see the baker sifting flour over a paper stencil onto proofed boules. There, on the cooling rack I could see the result -- loaves adorned with snowflakes, stars and Christmas ornaments.
Hmmm.
Not to be outdone by a supermarket, I went to work as soon as I got home. I shaped the doughs as usual but scored the top so as to leave a nice square of undisturbed dough. I spritzed them to make the dough surface nice and sticky and sprinkled flour from a mesh strainer over top a Christmas tree cutout, lightly tapping the side of the strainer. They came out pretty well, though placing them in paper bags proved a little damaging to the design. 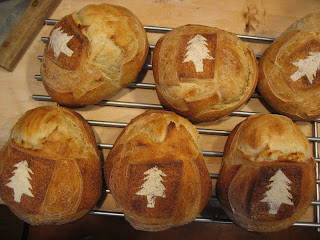 Who said I was a disciplined blogger? I never said it. Not a once.

It's not like I'm a complete slacker, though. Whilst away, I dedicated my creative energy to solving the backyard pizzaiolo's table-space dilemma.

This handy table-top device, which I modestly refer to as the "Mano de Dios," is constructed of cheap plywood and 1 x 2 boards cut and and assembled to mimic the functionality of the classic "sheet tray rack" ubiquitous in all baking establishments. I say "mimic" in the loosest sense because, make no mistake, this invention is (1) novel, (2) non-obvious and literally bursting with (3) industrial application (which, I think, just happen to be the three legal elements of patentability).

There are several accepted methods for using "the Mano." Pictured below is the classic technique known as the "Give 'n Go." Here the Pizzaiolo (me) stretches the doughs, places them on the floured boards and slides them into the Mano. Meanwhile the Pizzaiolo's assistant sometimes referred to as "Diego" (actually, here, Zencamel) prepares the doughs for the oven and returns them to the Mano where they await final placement in the oven by the Pizzaiolo.

If the Mano de Dios looks like something that might work for you, too bad. There's only one. 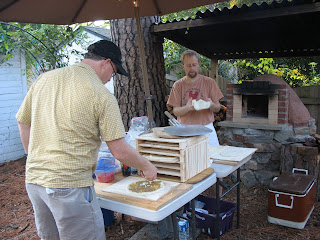 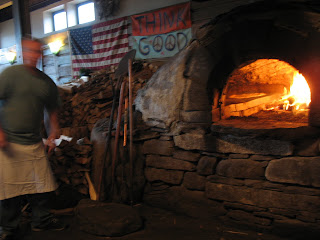 Well I know I owe my devoted readership some closure on my oven build, but hey, the three of y'all will just have to wait. I'll post some photos in the near future.
But for now, lets talk serious production earthen ovens. Earlier this month we made our annual summer trek to the Great North. My cousin and her family were the real attraction in Portland, Maine, but a close second was the Flatbread Company's restaurant on the waterfront. Its proprietors have smartly placed a viewing bench in front of the "modified Quebec-style oven." Undoubtedly it was designed to entertain the younger patrons, but I was able to squeeze between squirmy kids for a good view of the pizzaolo plying his primitive trade. The restaurant, whose affiliation with the original American Flatbread Company remains something of a mystery to me, serves up the same genre of simple but inspired pizza, salads and desserts. The space is not bucolic like the Waitsfield restaurant, but is almost as appealing. The view below is from the restaurant's back deck looking into a thickening Portland fog. 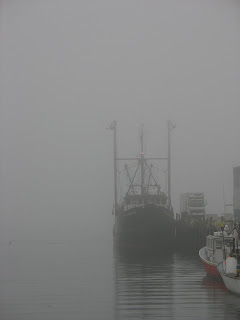 Deep at the core of my being, I know that Richmond is ready for such an establishment. But who shall bring it to us?

The BackBou gets a little media coverage...

See the Style Weekly piece on my oven that has outed me at work...
Posted by Backyard Boulanger at 6:01 PM 1 comment:

We begin with more mixing. This time we are mixing true cob -- a mixture of Virginia red earth, sand, straw and water. Because I had some powdered Red Art clay on hand and little left over coarse grog from the first layer, I added it as well.

I learned an important lesson about oven-building collaboration. While these projects are great fun for the kids, adult helpers can actually make the project go faster and provide good company. In this session, I was particularly lucky to have two helpers with great attitudes and actual experience in working with clay. In the future, I shall encourage more adult collaboration in my oven building activities.


Here, Mr. J does the cobbers' high step with me. 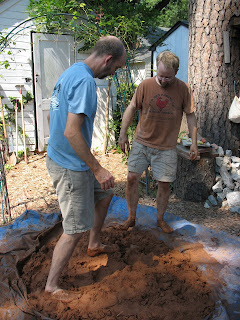 As before, we patted the cob into mushy bricks to facilitate the orderly shaping of the second layer. At the beginning of the day, it seemed anything approaching a brick shape would do. By the end of the afternoon, Mr. J's standards had changed and the bricks seemed much improved in shape and integrity. 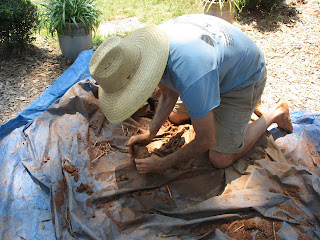 We laid the cob "bricks" in courses around the first layer. The trick is to proceed as though you are truly building one course on top of another, merely using the existing dome as a guide. Note how pressure is applied down and not inward toward the dome. 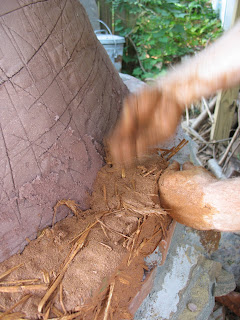 We mixed two large batches of cob and one tiny one just at the end because -- of course - we were a two bricks shy. Here, Ms. J and I put the last bits of cob in place. 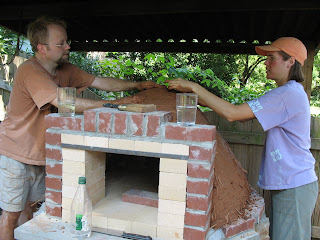 The last order of business was to smooth the outside of the second layer using hands and a rocking motion with a flat board. 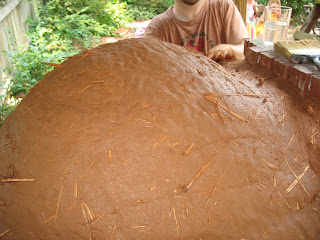 After drying out, which takes at least a few days, the oven is functional. However, a final layer of adobe plaster makes the exterior a little more presentable by, among other things, hiding the straw pieces. Next update will include photos of the "plastered" end product.

Posted by Backyard Boulanger at 5:28 PM No comments:

Last time, we had just completed another course of stone work. So we start off by filling the top three or four inches of the foundation with concrete because, if you recall, I was determined to make a floor that would not cave in. The first layer of concrete had vermiculite mixed in for insulation -- a nice idea, but poorly executed. I don't think the vermiculite layer will be thick enough to have a material insulating effect. We made the concrete flush with the edges of the foundation. 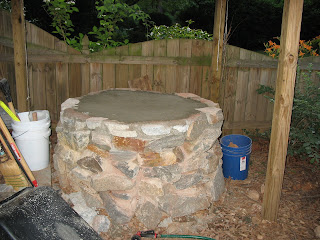 Next I added a ring of bricks (salvaged from the yard) and two concrete pavers. The idea was to create a circular sandbox on which to lay my firebrick floor (sans mortar). 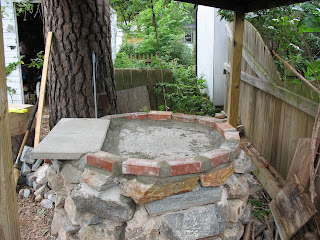 I dry-stacked a firebrick door frame using angle irons (as suggested by Kiko Denzer). I really wanted to make the entrance point of the oven a little more civilized this time. 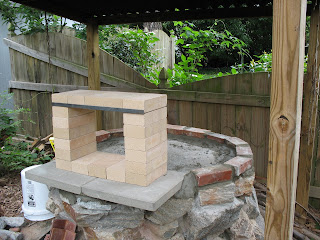 I've been dying to try a little brick masonry and this seemed to give the dry-stacked firebrick arch a little extra support. I am hoping the mortar will be insulated from the most intense heat so that it will not degrade too rapidly -- even if it does, it won't seriously undermine the structural integrity of the oven. The paving bricks are stacked in the center to hold in place a piece of drywall that will prevent the sand form from spilling through the door. 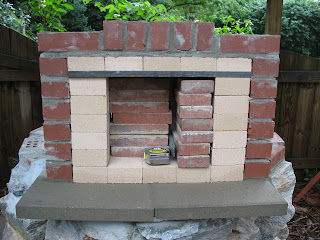 I don't have a picture but I laid sand on the concrete floor until it was flush with the two front concrete pavers. This picture shows the firebrick laid on top of the sand. I took some scrap bricks and laid them to the sides of the floor to keep things in place and to support the clay walls. 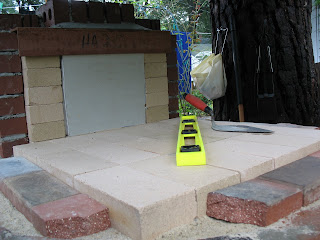 We spent a surprisingly long time forming the sand mound. Kiko cautions that the form should rise very steeply and then round off gently at the top. For some reason, the temptation is to build a pointy form, which makes for a poorly shaped oven. He says to aspire to a pregnant belly shape, which is probably why it took me so long. Try though I did, my best effort was still a pretty scary looking pregnancy. 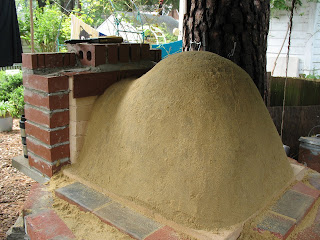 Once you sculpt a beautiful sand form, you promptly cover it up with ugly wet newspaper. Mine declared the immigration bill defeated. This helps form a clean break between the sand form and clay to facilitate removal of the sand. 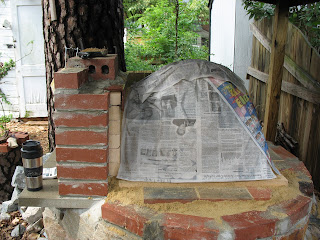 We mixed dry clay and grog -- this is where I part company with purists like Kiko Denzer. I used one part Redart Clay, one part Hawthorne Fire Clay, one part 35 mesh grog and one part course grog that the ceramic supply store had lying around and didn't know what to do with. I measured the "parts" by volume not by weight. In the end I used 100 pounds of Hawthorne, about 85 pounds of Redart and 175 pounds of grog. Kiko uses earth and sand. 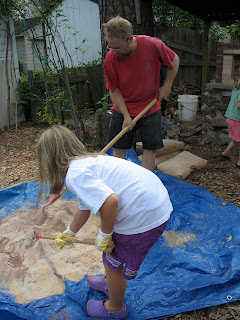 After adding water and mixing with our feet, we formed wet bricks. 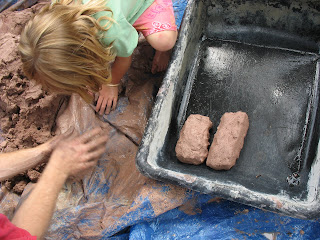 McGee, desperate to be a part of the process, kept dropping his tennis balls into the clay mixture. 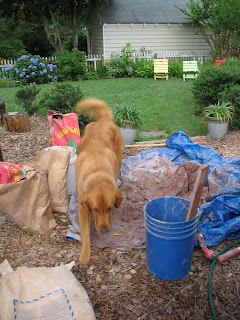 We encased the sand form with the wet clay. I made two larges batches of clay -- which ended up being about three bricks short (not reflected in the photo below - which was more like the halfway point). This was very frustrating. I made a third small batch of clay to top off the crown. 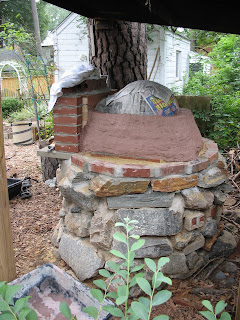 Once formed, I scored the sides with a trowel so that the next layer would have something to grip to. 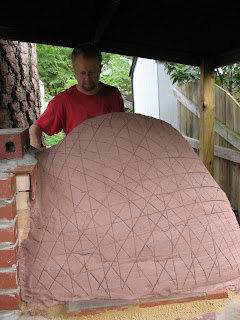